According to new research from Mitie, over two thirds (70%) of people who have served in the military and moved into facilities management reported that FM roles were a good match for the skills they developed in the forces, while more than three quarters (77%) said they would recommend the sector to other armed forces leavers. A new report, ‘Mobilising veterans in the facilities management industry’, shows both veterans and managers in the FM industry agree that the sector is a natural match for former servicemen and women. With over 20,000 veterans leaving the armed forces every year to join the civilian workplace, the report looks at how the FM industry can better support our armed forces leavers.

The research found that many of the key skills developed in the military – reliability, ability to perform under pressure and professionalism – are a strong match for those most needed in the facilities management sector. This is also the view of most managers surveyed, with four in five (84%) saying that veterans are likely to have the skills most urgently needed in the FM industry.

Despite having the key skills needed to help them succeed in their FM careers, many ex-service men and women were concerned that their lack of technical facilities management knowledge may limit their career opportunities. However, while managers noted the importance of these skills, they should not be seen as a barrier, with over half (53%) saying that they would like to see employers offering more role-specific training to support ex-forces employees.

Though the report found that a career in facilities management is a good fit for veterans, more than a quarter (27%) of former servicemen and women felt unprepared and in need of guidance when looking to join the civilian workplace. Half (50%) said that it was a challenge to find work after leaving the military, with a lack of job-seeking skills, such as CV writing, and not understanding which jobs would best suit their military experience highlighted as key barriers.

The report also highlighted how important the armed forces community is in providing support to men and women recently leaving the forces. A third (29%) of veterans found their FM roles via a recommendation from someone they knew in the sector. Meanwhile, around a fifth of veterans said that creating employee networks (21%) and providing mentors (18%) are crucial ways employers can help smooth the transition to civilian life.

Mitie will use the findings of this report to guide its own initiatives to help ex-service men and women transition to civilian life and build their career in facilities management. This will support Mitie’s commitment that at least 2.3% of its employees will have a military background by 2025, 0.5% above the average for the UK population.

“We’re delighted to see this report confirm that the facilities management sector is a natural choice for many armed forces leavers, offering ex-servicemen and women the chance to use the skills they’ve developed throughout their military career, as well as providing long-term career opportunities. With their professionalism, reliability and ability to perform under pressure, colleagues with a military background are a great fit for FM.

“However, with many veterans leaving the forces unsure which roles best match their skills, there is a huge opportunity for our industry. By offering the right support and guidance, we can help more former servicemen and women kick-start their careers in facilities management.”

The report builds on Mitie’s commitment to support the armed forces and to encourage more former military to join the facilities management industry. Mitie has already launched a number of initiatives to help ex-military personnel find work in the FM industry. This includes a dedicated Armed Forces Career Portal and its specialist Ready2Work – Military programme, giving veterans a chance to experience a placement in the FM sector. Through its employee network, the Mitie Military, it is also supporting its large community for veterans and reservists by offering a forum to share experiences with colleagues.

Results based on anonymous surveys of 191 former servicemen and women currently working in facilities management and 122 managers of armed forces veterans in the sector. The surveys were conducted between 1 and 26 April 2021.

Founded in 1987, Mitie’s job is to look after places where Britain works and is the leading facilities management company in the UK. We offer a range of services to Central Government and Defence customers; Communities (Healthcare, Education and Local Authorities); and Technical Services (Engineering Services, Energy, Water and Real Estate Services) and Business Services (Security, Cleaning and Office Services) to Private Sector clients in Financial Services, Manufacturing, Transport, Retail and Telecoms and increasingly to the public sector. Finally, our Specialist Services (Care & Custody, Landscapes and Waste Management) division serves both the public and private sector in higher margin niche businesses.

Mitie acquired Interserve’s FM business in December 2020 and now employs 77,500 people we are the champion of the ‘Front-Line Heroes’ who have kept Britain working during the COVID-19 pandemic. We take care of our customers’ people and buildings, through the ‘Science of Service’, delivering essential services and deploying industry leading technology to create safe and effective workspaces.

The business continues to execute its technology-led strategy and in the past six months has received multiple awards.

Find out more at www.mitie.com. 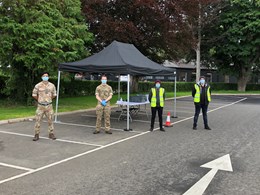