Two cancer charities will benefit from impressive proceeds raised at an annual charity ball organised by an inspirational pair of Mitie employees.

Now in its fourth year, the annual black tie event – held on Saturday 13 May at the Gailes Hotel in Irvine – saw 250 people come together for an evening of entertainment and fundraising. Through a grand prize draw and auction, funded by Mitie’s suppliers’ and sub-contractors’ generous donations, a whopping £32,000 was raised on the evening.

Ahead of the ball, Mitie employees were polled for their choice of charities to benefit from the funds and the following charities were selected:

CLIC Sargent – an organisation that provides vital emotional, practical, and financial support to young cancer patients and their families, during and after treatment.

Beatson Cancer Charity – an organisation that is committed to securing significant funding to support and enhance the treatment, care and well-being of current, former and future cancer patients and their families.

The lead organiser for the event was Jackie Long, Projects co-ordinator at Mitie, who has a special connection with The Beatson West of Scotland Cancer Centre as it is where she was treated for cancer of the throat and mouth. Her treatment was so gruelling it caused her to lose part of her tongue and she had to undergo speech therapy to learn to speak again. Determined to give something back to charitable causes relating to cancer, she teamed up with colleague, Raymond Murray,along with other charity committee members, to organise the first Ball in 2014. Since launching, the event has raised more than £100,000 for various cancer charities.

Raymond Murray, Area Director for Mitie in Scotland & Northern Ireland, said: “We are pleased to have risen just over £32,000 for these fantastic charities at the 2017 Mitie Ball. A special thanks to the rest of the charity committee members: Gavin Mcluskie, Lea-Anne Erskine, Stevie Welsh, Shirley Laidlaw, John McCluskey and Juliann McGhee, as it was a complete team effort to make this night the success it was. This money will help the charities’ achieve their goals, and so we are delighted to support them in this way, and to continue to support them through the various other fundraising activities we have planned throughout the year."

David Welch, Chief Executive of Beatson Cancer Charity, said: “We are delighted to benefit from the generous support of Mitie. Without support from our corporate partners, like Mitie, the charity would not be able to make such a difference to those affected by cancer. We’re very grateful to everyone at Mitie for their commitment to raising money for Beatson Cancer Charity. Their generosity will have a direct impact on thousands of cancer patients and their families, both now and in the future, through the dedicated work of the charity.” 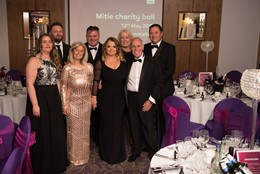