Mitie has built on its commitment to support the armed forces by launching a new policy for its community of reservists. To assist with their military responsibilities, all members of the armed forces Reserves employed by Mitie will now receive ten days paid leave every year, building on the previous policy of five days unpaid leave.

Reservists play a crucial role in supporting the wider armed forces and can be called up for active service at any time. The two week’s paid leave will support all Mitie’s reservists in fulfilling their service commitments, such as attending annual training camps, without impacting their pay or holiday entitlement. This new policy is part of Mitie’s ongoing commitment to the armed forces, having been awarded Silver on the government’s Defence Employer Recognition Scheme last August.

This new policy follows several new initiatives launched by Mitie to support its large community of armed forces veterans, reservists and military family members. This includes establishing an employee network, The Mitie Military, to offer these colleagues a forum to share experiences and drive positive changes within the business. Mitie has also created a dedicated careers portal for those with a military background to highlight potential career opportunities within the facilities management industry.

The additional support for Reservists was announced to the Mitie Military network last week at Mitie’s resigning of the Armed Forces Covenant, attended by Air Marshal Richard Knighton CB, Deputy Chief of the Defence Staff (Finance and Military Capability) and Phil Bentley, Mitie CEO. This reaffirms Mitie’s pledge to support veterans, reservists and serving personnel and aid their transition to civilian life.

“The armed forces community provides vital skills and knowledge to Mitie and the facilities management industry as a whole and so it is only right that we support them in return. By increasing our commitment to two week’s paid leave, we’re proud to be playing our part in making it as easy as possible for reservists to serve our country.”

Mitie employs 48,900 people across the country, looking after a large, diverse, blue-chip customer base, from banks and retailers, to hospitals, schools and critical government strategic assets. It takes care of its customers’ people and buildings, by delivering the basics brilliantly and by deploying advanced technology. It is pioneering the Connected Workspace, using smart analytics to provide valuable insight and deliver efficiencies to create outstanding work environments for customers. 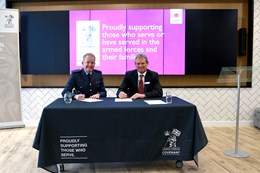