The contract, which comes with an optional three-year extension, will see Mitie lead on the provision of custodial services within the Hartlepool and Middlesbrough areas of Cleveland. Mitie will also provide bail management and the identification suites for ID parades.

The newly awarded services will integrate with the re-awarded existing forensic medical services that Mitie has been providing to Cleveland since 2010, which is expected to deliver £1.8m in cost savings.

Mitie was awarded the contract because of its experience within the custodial sector, the learning and development pathway for its employees on the contract, its training opportunities - most notably around mental health, and its ability to deliver a fully integrated service.

Seb Stewart, Managing Director for Care & Custody Health, commented: “We’re delighted to be working with the Police and Crime Commissioner and Cleveland Police. We look forward to building on our existing strong relationship with Cleveland over the coming years and developing a partnership that provides an efficient and effective integrated approach to the complex issues faced in the custodial environment.”

Police and Crime Commissioner, Barry Coppinger, said: “This is an extremely important contract, as it is about managing people in complex situations, looking after the welfare and ensuring legislation is adhered to.

“We look forward to working with Mitie and will seek to review the contract to ensure that a good service is being delivered.

Assistant Chief Constable Jason Harwin said: “Police custody is an important part of police investigations and in Cleveland around 20,000 people are dealt with in custody each year.

“We follow the National Custody Strategy to ensure that our use is legitimate and efficient, which includes limiting the use of police custody for Mental Health Act detentions. Mitie Care and Custody Health shares our aim of providing a safe and effective detention environment.” 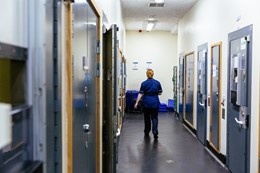